MELVILLE, NY — The Long Island Music and Entertainment Hall of Fame (LIMHoF) recently announced the winners of its 2022 Music Scholarships. This year, four Distinction in Music Award Scholarships were awarded to graduating high school seniors who plan to study music in college and pursue a career in this endeavor.

This year’s winners are Gioianna DiGiorgio and Andrew Arloro, both from Half Hollow Hills High School; Emily Wei from Great Neck North High School; and Stephanie Massimo from Syosset High School. Every year, students from Brooklyn, Nassau, Queens, Suffolk, and Brooklyn are encouraged to apply for the scholarships. This program one of several education acknowledgements that are sponsored by LIMHoF, which include the Music Educator of Note and the High School Recognition Awards.

LIMHoF is honored to celebrate each recipient’s dedication to music in addition to supporting his or her college plans. LIMHoF is able to provide these annual scholarships thanks to the support of the Long Island music community.

“The Long Island Music and Entertainment Hall of Fame is honored to have the opportunity to support and acknowledge accomplished high school seniors who are pursuing a future in music,” said Tom Needham, LIMHoF Education Chairman. “The talent that exists on Long Island is something we at LIMHoF want to celebrate. In addition to following their own dreams, we believe these students will encourage and inspire others.” 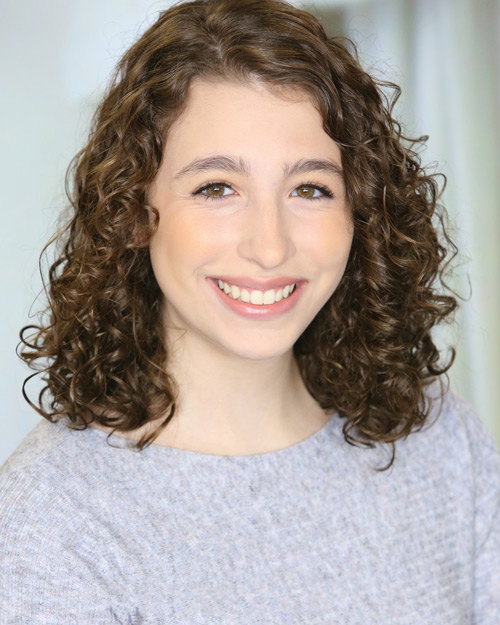 When she was only a few months old, Gioianna would stroll around her home in her walker singing tunes she made up. Gioianna believes that music is a connection to nature and other people and a beautiful way to tell a story and to express yourself and your emotions.

“As soon as I was old enough to understand the concept of theater, I was enamored with the idea of being on stage, and wanted to be a part of that world,” said Gioianna in her application essay. “My life-long passion for theater inspires me to push through the challenges so that I can pursue my passion.”

Since age 7, Gioianna has performed in local community theater productions and has developed her singing talents as a soprano singer and is interested in a career in musical theater.

“I am extremely grateful to the Long Island Music and Entertainment Hall of Fame for this prestigious scholarship!” said Gioianna. “I am excited to receive this scholarship, as music has always been such an important part of my life.”

Gioianna’s career aspiration is to become a performer for the stage and screen.

“I hope to entertain audiences in a variety of venues from regional theater, national tours, cruise ships to film, TV and Broadway,” Gioianna said. “More importantly, I want to tell stories to elicit emotions and perhaps even change perspectives. While some may see performing arts as a frivolous pursuit, during the pandemic, I believe the world finally understood how important the performing arts are to our lives.”

Gioianna DiGiorgio will be attending Baldwin Wallace University, where she will major in its BFA Acting program and also minor in Music at its prestigious music conservatory.

“I am excited to learn music theory and continue to study voice at such a prestigious music school,” Gioianna said. “I am also really looking forward to learning all that I can to build a strong skillset to aid me in my professional life after college. I can’t wait to go to get started on my BFA! 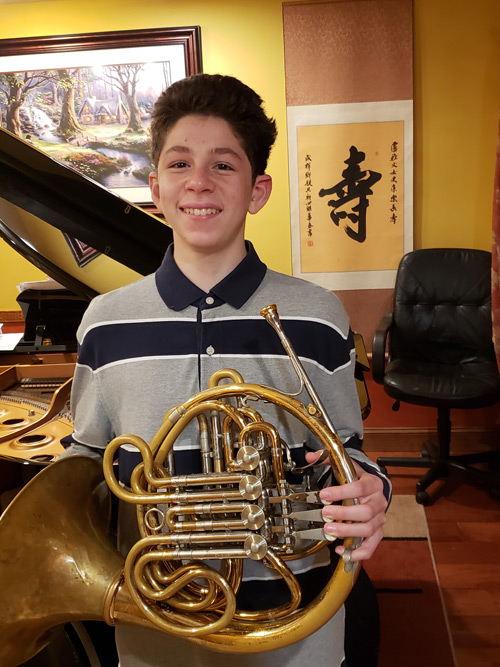 Andrew Arloro is a 17-year-old musician who lives on Long Island, New York. He is a recent graduate of Juilliard Pre-College and a current student at Half Hollow Hills High School East.

Last year, Andrew won the Discovery Competition for Children’s Orchestra Society. He has performed solos at Carnegie Hall and Lincoln Center over a dozen times.

Andrew has had the honor of musically touring China, Spain, and Italy. He has been awarded the title of Principal Horn in various ensembles, including Juilliard Pre-College, All-State, SCMEA, Children’s Orchestra Society, Gemini Youth Orchestras’ Festival Winds and Symphony, and Cross Campus Wind Ensemble.

Next year, he will continue his studies with Erik Ralske at The Juilliard School, pursuing a Bachelor of Music in Performance on the French Horn.

“I would like to thank the Long Island Music and Entertainment Hall of Fame for the amazing opportunity to work with them, create with them, and share with the world the Joy of Music,” Andrew said. 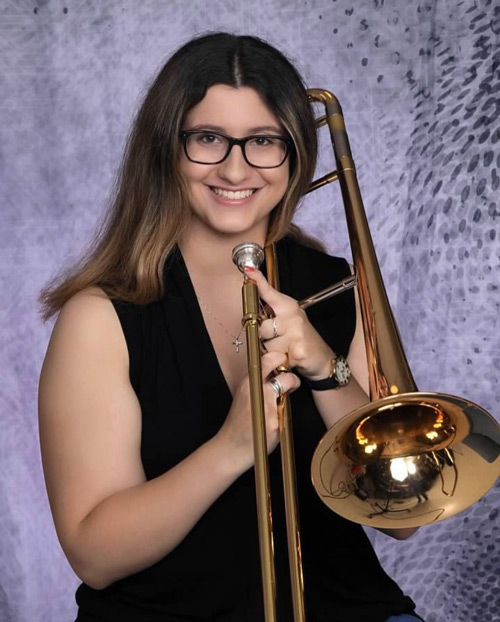 Stephanie Massimo is a graduating senior at Syosset High School. She started playing the Trombone in second grade. She also plays the bass trombone and baritone horn. Throughout the years, she’s participated in ensembles in Syosset, Nassau Suffolk, All-County, All-State, All National, and various summer camps.

“I genuinely loved performing with these groups and meeting new people,” Stephanie said in her application essay. “Music has always been an important part of my life. It wasn’t until recently, though, that I decided to study music in college.”

In the fall, Stephanie plans to attend the University of Tampa (UT) as a Music major in the Trombone, pursing a Bachelor of Arts in Music. Her eventual goal to return to NY and possibly get a job with a Broadway pit orchestra. Allowing her to use everything I learn in college while enjoying the music she likes best.

“I am extremely honored to have received this scholarship from the Long Island Music and Entertainment Hall of Fame,” Stephanie said. “I hope to further advance my skills in both music and performance. I plan to participate in many of the bands/ensembles that UT has to offer.” 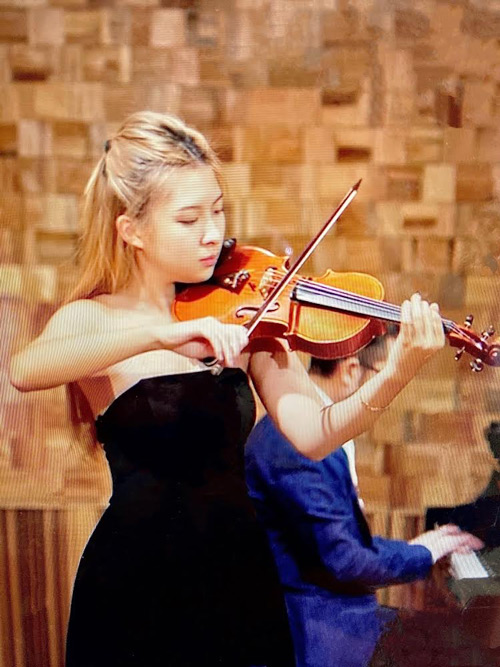 Tiantian “Emily” Wei is a graduating Senior at Great Neck North High School. She has been playing both the piano and violin from age 5.

Starting in elementary school, Emily has won numerous awards for her music talents and has participated in a wide range of performances with various music organizations, including the New Jersey Youth Symphony Orchestra, NYSSMA, All County and All State Symphony Orchestras and more. Emily plans to attend Mannes School of Music in the fall.

“As the German poet E.T.A. Hoffmann said: ‘Where the language stops, the music begins.’ Emily said. “Music has no boundaries. It has unlimited possibilities and tremendous potential to be created and performed to express one’s unique understanding of music and sentiments, and to be shared with other people who may relate and empathize. I think that is the soul, and one of the missions of music is that it inspires and attracts people. It is an honor to be a LIMHoF recipient, I appreciate the recognition from Long Island Music and Entertainment Hall of Fame.”

In 2021 she went to the Fete De L’ Alto LaSalle Summer Festival (France) and had master classes with Christophe Giovaninetti. In 2022, she performed as the Concertmaster with Great Neck North High School Symphony Orchestra at Carnegie Hall and also played a lot of violin recitals at Oprea America Music Hall and Episcopal Church. She also played chamber music of Vivaldi Concerto at Salmagundi Club for two nights and has volunteered to perform in local hospitals, nursing homes and retirement homes. She has also served as a NYSSMA monitor every year when Great Neck hosted the NYSSMA Piano Festival and helped at the annual Faculty Recital.

“This experience also promoted a clearer vision of my future music career,” Emily said in her application essay. “I envision myself entering the New York Symphony Orchestra or forming my own chamber music group, performing in concert halls all over the world to show the beauty of music and expressing my unique understanding of music. I am full of passion for music, all this experience makes me more sure of my goals to continue my music career. If I am honored to receive this scholarship, it will be the greatest recognition and encouragement to my four years of high school and my music career. I will cherish all the time spent with music and keep being passionate about music.”