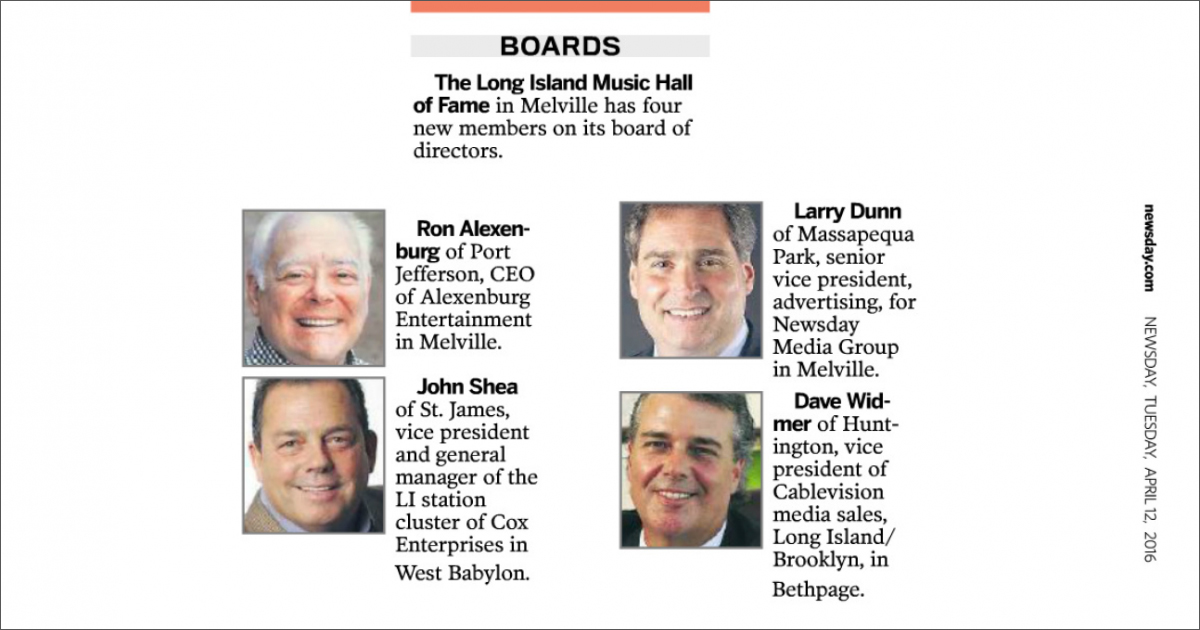 The Long Island Music and Entertainment Hall of Fame (LIMHoF) has announced the election of four new members to its Board of Directors. The Hall has elected Ron Alexenburg, Larry Dunn, John Shea and Dave Widmer.

Ron Alexenburg comes to the LIMHoF with over 50 years’ experience in the music industry and currently serves as President and CEO of Alexenburg Entertainment Group. In 1965, Alexenburg joined CBS Records. He soon moved onto Columbia Records where he became the youngest head of promotion in the company’s history, working with the label’s top talent. He would rise through Columbia Record and eventually be promoted to be the Senior Vice President and General Manager of Epic Records, a division of CBS Records Group. Among the artists that Alexenburg worked directly with were Boston, Meat Loaf, Charlie Daniels and Michael Jackson. Under his helm, Michael Jackson’s Thriller became and still is the best-selling album of all time.

Dave Widmer has managed media and marketing outlets on Long Island for the past 18 years and is currently Vice President of Cablevision Media Sales, Long Island/Brooklyn.

The new Board Members will join the Hall at an exciting time in their history as the organization works to build their first home and museum in the new Wyandanch Village redevelopment.

“We are very excited to bring these four great individuals into the Long Island Music and Entertainment Hall of Fame family. Not only do they each bring an extensive amount of credibility to the table, but they all have a deep passion for music and for what we look to accomplish as an organization in the near future,” says Hall of Fame Chairman, Ernie Canadeo.