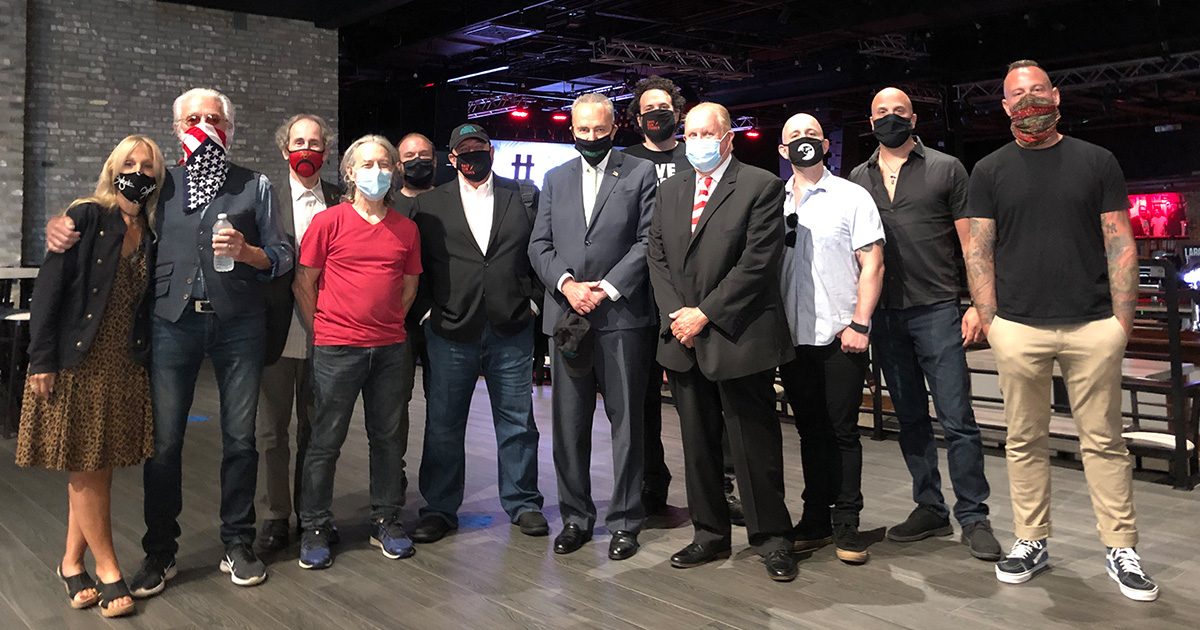 SCHUMER CO-SPONSORS SAVE OUR STAGES ACT

U.S. Senate Minority Leader Charles Schumer today announced at a press conference that he is co-sponsoring bipartisan legislation aimed at providing relief to independent live venues, promoters and festivals across the nation. Since the pandemic shutdowns began in March, music venues, comedy clubs, and festivals have been shuttered with no revenue, high overhead and no timeline for when they can fully reopen. ​The National Independent Venue Association (NIVA)​ said that if the shutdown lasts six months or longer and there’s no meaningful federal assistance, 90% of its members would be forced to fold forever.

“Independent venues, like theaters and concert halls, are the beating heart of New York’s cultural life and a driving force in the economy. These local businesses were among the first to shut down at the start of the pandemic, are struggling to stay afloat, and will be among the last to reopen,” ​said Senator Schumer​. “That’s why it’s so important to provide dedicated federal assistance to independent venues so when it is safe, we can gather again for music, comedy, theater and other live performances in venues that have been around for generations. I’m proud to co-sponsor the ​Save Our Stages Act,​ and I’ll fight to include federal funding for independent venues in any coronavirus relief legislation.” 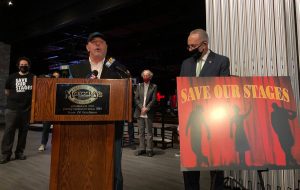 The ​Save Our Stages Act​ (S. 4258), introduced by Senators John Cornyn (R-TX) and Amy Klobuchar (D-MN), provides vital support for independent live music venues that have lost nearly 100% of their revenue since the pandemic began in March. The companion bill in the House (H.R. 7806) is led by Representatives ​Peter Welch (D-VT) and Roger Williams (R-TX).

“Local independent scenes are the cultural lifeblood of our communities as well as an economic driver throughout America,” said NIVA Executive Director Rev. Moose. ​A Chicago study last year showed that for every $1 spent on a ticket at a local venue, $12 of economic activity was generated for area businesses such as restaurants, retailers, and hotels.​ “These mom and pop venues are unable to fully reopen until well into 2021 due to safety concerns posed by large gatherings. These institutions draw most of their revenue from acts that tour the United States, and until it’s safe to gather people en masse, it won’t be possible for venues to bring back their staff, which is one reason why the Paycheck Protection Program (PPP) does not work for this industry.”

Said James Murphy of LCD Soundsystem, “These venues are places that occupy parts of cities that nobody wants to be in when they start. They fill in the gaps and communities spring up around them. They take those warehouses that nobody wanted to be in and they build places that foster the most diverse music scene in the world. Thank you to the venues that let me play and let me work for the 30 years I’ve lived here. We’re not going to be able to rebuild these from zero. You can’t knock out all the mom and pops and think that more mom and pops will spring up. If we knock them out, it’s just chains.
Write your senators and ask them to support this bill – it’s critical, or this whole industry is going to go away without it. The very nature of being independent means these people, these centers, don’t have the kind of voice that bigger companies do have – they need your voice, so please do your best to support them.”

So far those concerned with saving independent venues have sent 1.8 million emails have been sent to their elected officials through ​SaveOurStages.com​. 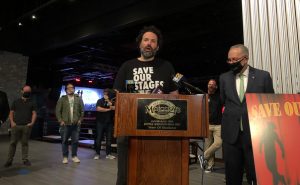 The proposed legislation would provide Small Business Administration grants for independent live venue operators, promoters and festivals affected by COVID-19 stay-at-home orders. These grants would provide at least six months of financial support to keep venues afloat, pay employees, and preserve a critical economic sector for communities across the country.

“Although independent music venues have access to PPP loans, the length of this shutdown means that venue owners are unable to utilize these loans in a way to receive forgiveness or pay our overhead costs,” explains Dhruv Chopra of Brooklyn’s Elsewhere. “Federal grants are the best way to keep us afloat. We whole-heartedly thank Senator Schumer for recognizing our value and our plight and he’s fighting to do something about it.”

In Schumer’s home state of New York, The Save Our Stages Act will not only help to save independent concert venues, but independent Broadway stages as well.

“Senator Schumer understands the severity of our situation and we applaud him for his co-sponsorship of the Save our Stages act,” says Le Poisson Rouge’s Justin Kantor, NIVA Vice President and Co-Founder of the New York Independent Venue Association ​(​NYIVA​)​. “New York City’s culture is tied inextricably to the city’s sustainability and independent venues are the city’s cultural hubs. From tourism to real estate, our collective economic impact is in the billions. The current situation is devastating and if nothing is done, venues that have been around for decades will go out of business. It’s impossible for any performance space to keep this up for months on end without generating revenue. Live streaming is not the answer and will not even make a dent in a venue’s monthly expenses. Our collective survival is hanging in the balance.” 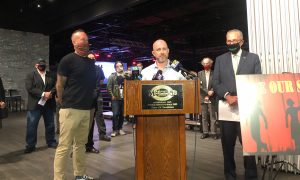 “Jazz clubs in New York serve as the incubator for Jazz throughout the world. If we want to preserve America’s true artform then we need to protect the intimate Jazz clubs that remain closed and will not have the ability to reopen until after a vaccine,” ​adds Blue Note Entertainment Group President Steve Bensusan. “The passing of the Save Our Stages act will save live music in New York City and throughout the country. We thank Senator Schumer for his co-sponsorship of this bill.”

Anyone wishing to have their voice heard should go to ​www.saveourstages.com ​where they can tell their elected officials that they care about their local independent venues and want them to get assistance until they can reopen safely. So far more than 1.8 million emails have gone to Congress to let elected officials know their constituents want independent venues to receive the assistance they need so they can reopen when it’s safe.

About NIVA
Formed at the onset of the COVID-19 shutdown, National Independent Venue Association (NIVA), now represents more than 2,600 members in all 50 states and Washington, D.C. These independent venues and promoters were the first to close and will be the last to fully reopen. NIVA’s mission is to preserve and nurture the ecosystem of independent live music venues, promoters and festivals throughout the United States.